Chennai Metro Rail set to chug off today at 12:00 pm 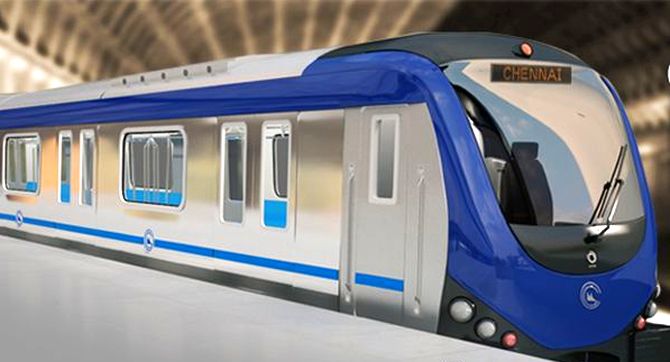 Chennai Metro Rail set to chug off today at 12:00 pm

Chennai Metro Rail may offer free rides for the public during the first few weeks of operations, sources said.
Officials are considering this option to boost their image and draw people into using Chennai Metro Rail, sources added. "This is an attempt to increase the ridership in the Chennai Metro Rail; but the proposal has not been finalised as yet," a source said. The minimum fare may be Rs. 10 and the maximum may be Rs. 30-40, say sources.
Nine trains will run on the first stretch from Koyambedu to Alandur, a distance of 10 km that will initially be operationalised. "Initially, the there will be a train running every 10 minutes and later depending on the increase in the number of people travelling by Metro Rail, it may increase," another official said.
Chennai Metro Rail that was launched in 2009 is expected to be operationalised from Koyambedu to Alandur anytime after the by-election for R.K. Nagar constituency is over on Saturday. "The dates are not clear as yet. We expect the operations to begin in the first week of July," an official said.
Though the Metro Rail service, going by the original plan, was scheduled to have been operationalised in October last year, there were various delays in the commissioning of this project.
Facts about Chennai Metro Rail:


Initially nine trains will be used for operations from Koyambedu to Alandur which covers a distance of 10 km
Passenger capacity of each train: 1,200
Average speed of train: 35 kmph.
Maximum operating speed: 80 km/hour
Duration of halt in each station: 30 seconds
The train operation plan provides for 4.5 minutes Headway with 4 - Car train in Corridor - I & II during peak hours and 10 minutes Headway during lean hours in the initial stage of train service.
Koyambedu to Alandur: 15 minutes

Running of services for 19 hours of the day (6 AM to Midnight)
1. The trains run on a fixed time table everyday. The timetable is prepared the previous day factoring in frequency, peak and non-peak hour etc. An announcement system is in place to inform passengers of an incoming train.

2. In case of an emergency, a passenger can get in touch with train operator. He communicates with the operation control centres who in turn intimate it to the next station controller to deboard the passenger.

3. Operation Control Centre (OCC) is the nerve centre where all trains of Chennai Metro Rail will be monitored.

4. Currently, there are seven people in OCC including chief controller and traffic controllers.

5. If the driver falls ill during train operation, the train automatically applies emergency brake and stops.

6. If there is a problem at the OCC, the control is transferred to backup stations like Ashok Nagar and Koyambedu.

7. The trains are currently tested on both manual and automatic mode.

Advance reservation for the special trains will commence on June 25